The next morning, we all woke up, packed our bags, and then headed out of Blanket Creek Park. We went straight to Revelstoke which wasn’t very far of, to buy some groceries. It took us quite a while to find parking because the Saturday market was on, which Liam and I just walked through quickly.
Once we started driving away, we quickly reached the Rocky Mountains. They were massive, and we had to go up and through them, even though the car wasn’t working too well. So about five minutes later, we began up the steep highway, going only about sixty kilometres per hour.
Right about when the road started getting flat again, we saw this black shape walking down a hill next to the highway so we kept our eye on it, but when we got a little closer, we realized that it was a Bear! A Black Bear! It was the first time Liam and I had ever seen a bear in the wild! Liam tried to get a picture but he didn’t have enough time. A little while later, we saw some mountain goats! Even some baby ones! It was amazing.
After our encounter with the wildlife, we reached Golden. We only made one quick stop at the visitor centre to go to the washroom and for Liam to get this sticker that he collects. 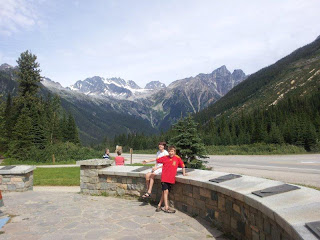 Our next stop was at the famous Roger’s Pass. We learned about the glaciers up on the mountains, and that an avalanche came down and killed a ton of people back when they were building the train tracks across Canada. It was a really great view!
After that, we started going down, down, down, and when we got to the bottom, the car stopped. We didn’t really have anything to do, so our dad just made sandwiches. Once we were done eating, the car started up again. We drove to Yoho for Liam to stop and get one of his stickers and then kept going, but of course, the engine stopped again, so we just sat there until it started up again.
The car didn’t stop at all again on our way to the camp site by Lake Louis, which was still quite a ways. Once we got to the check in, there was a big line up, but thankfully, there was still room inside.
Once in, we made our tents and then went to see this little play talking about the 100th year anniversary of Canadian provincial parks. Once that was over, we went back and had a fire with hot chocolate because it was starting to get chilly out.
When were all done everything, Liam and I got in the tent and went to sleep.


All night I was freezing, and in the morning, I realized it was below zero Celsius. We were all freezing cold, but my dad had decided the night before to unhitch the trailer early in the morning and then go up to Lake Louis. So that’s what we did. 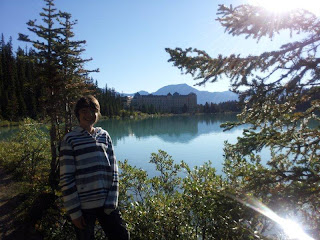 When we got up to the lake, there was barely anybody there, and the scenery was amazing. It looked just like the pictures with the blue water and the snowy mountain at the end. We took a few pictures and then walked along the path next to the lake, and every time I had a chance, I would take a handful of the refreshing, but freezing cold lake water. On our way back I went into the Royal Chateau Louis  and looked around.
After that, we went back to the campsite, put away the tents, had a shower, and then started driving towards Banf. Nothing really happened on the way to Banff, except the great view of the rocky mountains.
After a bit of a drive we finally reached the famous Banf. We got out of the car and walked up and down the streets while taking pictures and looking into a few of the stores. We didn’t spend too long doing that, but right after we visited the Banf Springs Hotel and got some pictures. 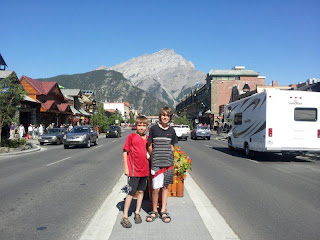 Once we were out of Banf, the rocky mountains pretty much just ended and it all became prairies.
We kept driving for an hour or so until we came to big Calgary. We found a place to park and then walked around downtown for an hour. The main reason was to visit the fifth tallest building in Canada. The Bow. It was really nice. After a lot of pictures, we went back to the car and started driving to our camp site. The fairly famous Dinosaur Provincial Park. On the way we stopped for groceries and went to Subway for dinner. After that we kept driving but it was  getting dark and we were running low on fuel, but after getting lost once, we finally reached our destination.
Although it was dark, we put up the tents and then went to bed.
At last! 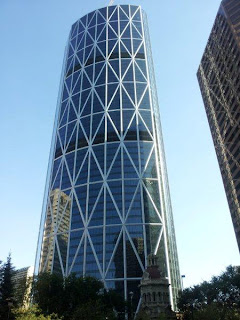