I thought I was going to loose Liam. When I looked down through the companionway he was unconscious and shaking. I can’t begin to describe the feelings of panic and fear I felt in an instant.

We were anchored in San Juanico. A beautiful, secluded anchorage miles from anywhere. We had arrived the day before and planed on staying for a couple of days. This was one of those ‘no internet access’ anchorages. Internet is available wherever there is cell phone access, and that is pretty hit and miss in anchorages on the Baja peninsula. In order to get work done, I need internet, so I try to space these anchorages so we are not more than a couple of days without it.

The weather was due to turn windy, so we were going to whole up here until it blew over. Mr. Liam likes to watch his movie in his bunk at night, and then get up pretty lazily in the morning, usually a few hours after I have put in work. This morning was no exception. I was in the cockpit having a coffee listening to Liam laying in his bunk blabbing on about planes as he usualy does. After an hour or so of this he got up and climbed the companionway steps to look at a plane that was passing over. I followed his gaze up.

The next thing I new I heard a loud crash and Liam was gone from the steps. I jumped up and found him laying in the galley on his back, shaking. ‘Liam, Liam’, I shouted. He stopped shaking and opened his eyes. He did not know where he was and what was going on. 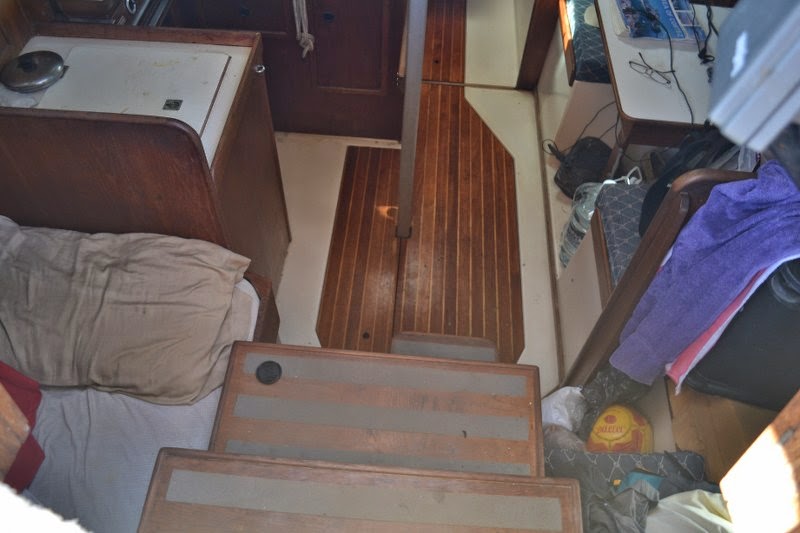 We checked to make sure nothing was broken. However, he fell from two steps up and into a small, confined area. He had a large scrape on his back. He acted groggy and had pain in his neck and his back.
We concluded that he had been pretty lazy and got up to fast, and immediately looked up. He then just passed out and fell. It was not the passing out that worried me, but the fall.

The rest of the day he was tired, groggy, and in some pain around his neck and his lower back. I suspect he had minor shock. The neck pain was in the muscle, and so it seemed that there was nothing broken. And I was in a bit of shock too. I don’t think I will ever get the image of seeing him passed out and shaking out of my head. 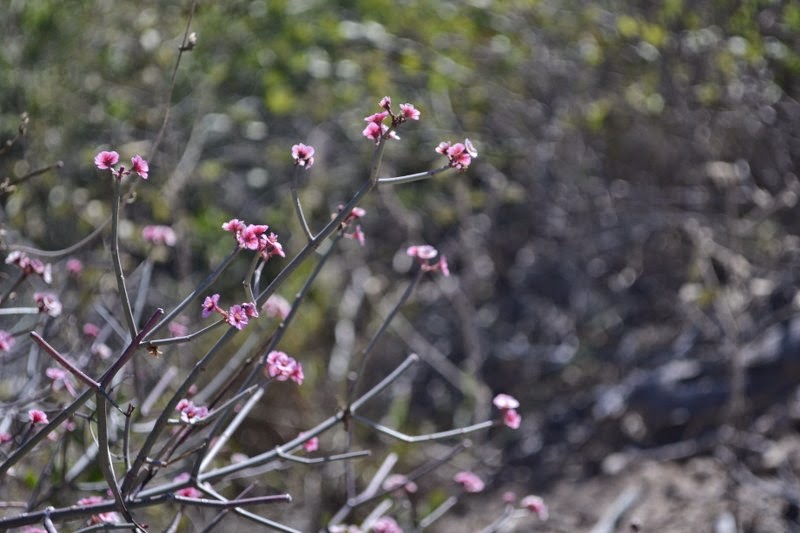 We went for a walk on the beach a later, but he was tired and so we did not push it. Later in the day Liam wanted to go dinghy trolling to catch a fish for our dinner. So we got the dinghy all set and went out. I was not really expecting to catch anything, but on our way back after an hour, low and behold Liam caught a nice big fish for our dinner. 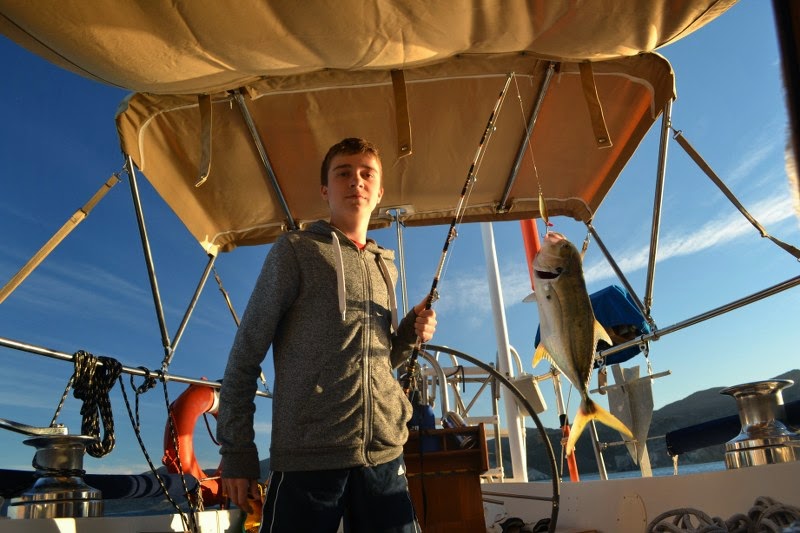 We brought it back and he cleaned it and I fried it up. It was a good way to end the day. 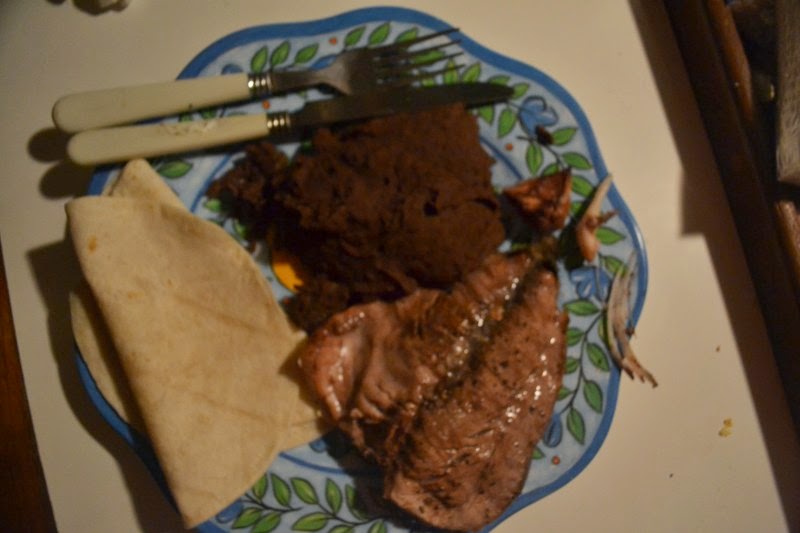 The next morning we headed off to our next destination, Isla Coronados. We stayed in the lee of the island for the night and had dolphins and whales around us. 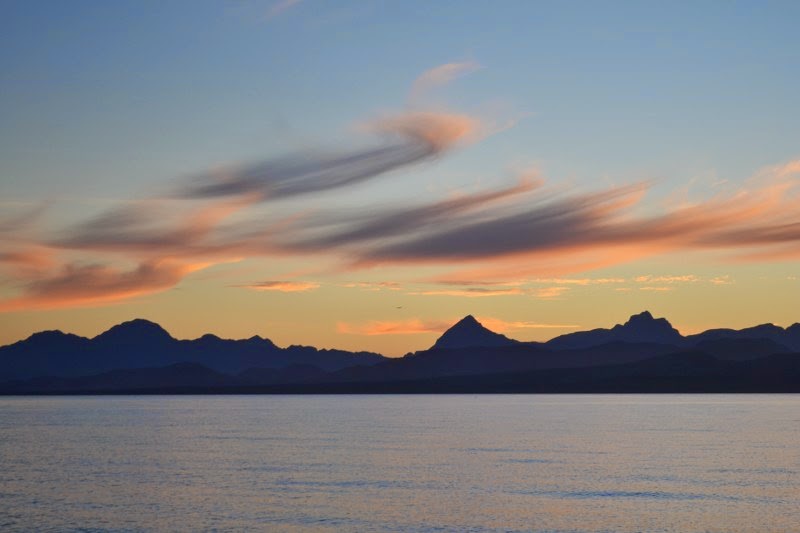 We heard on the radio that there was a whale tangled in fishing line just a few miles away from us. It was getting dark and no one could do anything to help, at least not until the next day. We listened on the radio. I thought of the whale and how people were powerless to help, and how sometimes things happen we have no control over. 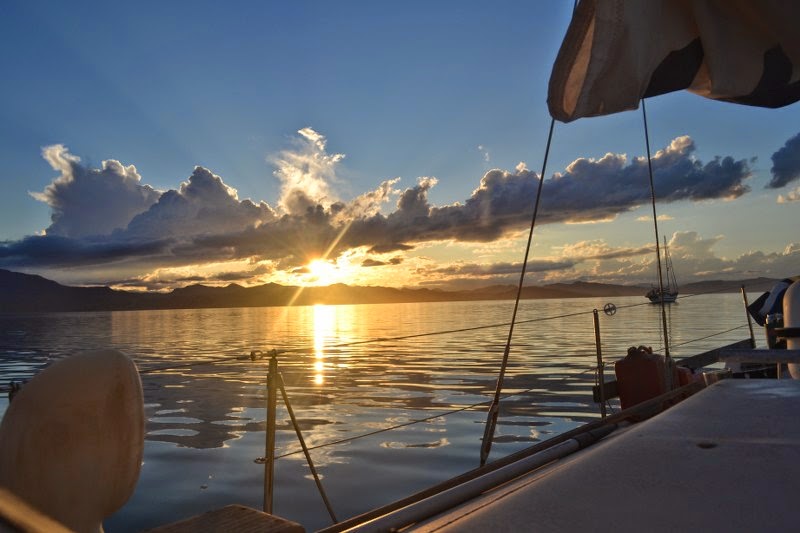