We are back in Puerto Escondido. We were in Isla Coronado for two nights and it is an old volcano.

We woke up in the morning and got the dinghy ready to go to shore, when some cruisers came to say hi. We had been having engine problems, and they said they had the say problem. They said that our prop might be dirty and that we should consider cleaning it, but while we were talking, Liam dropped the second pair of pliers. After they left, Liam and I begged our dad to dive seventeen feet to get them, because without them we could not go fishing. So he dived, and I do not know how, but he got them.

So we got in the dinghy and went to shore.

First I went to see if the fishermen were cleaning the fish, because I like watching them, but they weren't. So I went back to the my dad and Liam. Liam was collecting little clams right under the water next to shore for dinner so I helped.

We got quite a few because they are really tiny. We put them in Tupperware and went back to the boat and then went fishing.

We decided to go to a small Island in the dinghy not far off to go fishing. I caught a tiny Bass, but we let it go and we caught a ton of three feet long Needle Fish, and let them go to. You can't eat them because they are too skinny. We kept going and Liam caught another little Bass that we let go.

I got a huge tug, and it was either a big fish or a rock, but it snapped my line and I lost my lure. So we went back to the boat. I cleaned half of the fish that Liam caught and Liam cleaned the other half, and for dinner we had rice, clams, and fish. It was really good.

After dinner my dad wasn't feeling good so he took a nap while I did the dishes and cleaned the blood out of the cockpit while Liam put everything away from dinner, and then we all watched Doctor Who.

The next morning we went to Loreto to anchor just for a few hours. The engine was doing fine and it was pretty calm. We anchored there and then went to shore. 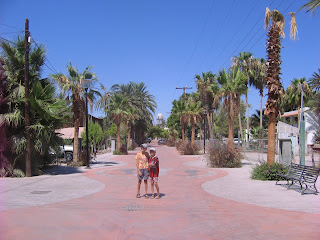 We started looking for a taco stand that we went with Rocky and Brew but couldn't find it. So we started looking for a fishing gear shop but couldn't find that either. So we asked directions from another gringo. He recommended a few restaurants so we just went to a one that we found. I had chicken burritos, my dad had fish tacos, and Liam had scrambled eggs. It was pretty good. After we finished we went to a little shop and bought drinks while Liam played soccer, and then we asked the tourist information for the fishing store and they told us where to go. We went but they didn't have what we wanted. So we went back to the boat. It started getting windy, and it was not a good spot for where the wind was coming from. So we headed off.

The engine was getting really bad. The problem is it doesn't give any power, only a little bit even when we put it on full throttle. So we had to sail there, and the only way to sail, was to zigzag there, and so it would take even longer. We were going pretty fast and tipping a lot so Liam and I went up on deck. When we were getting pretty close, my dad's tools fell of the couch and went everywhere, and then our our little computer slid of the table and fell on the ground. Half of the screen cracked so it was broken, and that was what we used for navigation. But we kept going. And finally, we got to Puerto Escondido. We got off the boat and went to shore. I went for a quick swim and then looked at magazines while Liam played soccer.

After everyone had left we went back to the boat, cleaned everything up and then had dinner at nine o'clock.

And then went to sleep.

This morning my dad found out what was wrong with the engine and he fixed it. Right now we are getting ready to go to the dock and fill up with water and then we are going to either Agua Verde or Candeleros Chico.