When we got to Puerto Escondido we went to shore. My brother and I went to
the pool, while my dad went down to where all the cruisers hang out.
Then we played a bit of soccer and then went back to the boat.
The next morning we did home schooling, cleaned up and then took the boat to
the dock and filled up with water.
While we were at the dock, we got stuff from the store that we needed, and I
played a bit soccer. Then we left Puerto Escondido heading for either
Candeleros Chico are Agua Verde. 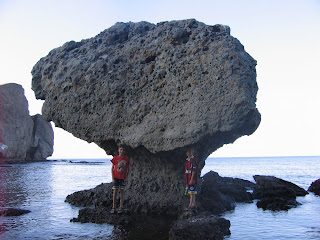 When we saw there were no other boats we went (Because it is only for one
boat). But then we saw a power boat that was heading straight for Candeleros
Chico so we thought we wouldn't make it, but then the boat completely
changed direction and started heading somewhere else, so we went in the
anchorage.
When we got the anchor down we relaxed and then went snorkelling, it was
great. There was an Octopus and a Zebra Moray eel. Then headed back to the
boat. 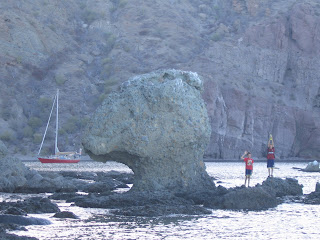 After dinner we went for a walk. We walked along the beach and named some
little rocks that were like Islands. We were there for about an hour and a
half.
After we went back and watched Monty Python's Flying Circus.
The next day we left for an anchorage called Nopolo, it was a ten hour trip.
We played games and my brother and I played with cards called Yu-Gi-Oh
cards.
It felt more than ten hours so by the time we got there we were all
exhausted, it looked kind of rough but we didn't want to go another hour to
the next place. But when we got further in the bay it felt better so we
stayed.
I made Macaroni and Cheese and then we played with hour Yu-Gi-Oh cards.
Well that's all for now
By Liam
Posted by Outrider at 20:52