Kai - Back to Toronto


Sorry it's been so long since we did a post. For the last week or so we've been getting the boat ready to go back up Toronto. We had to get it all ready in a marina in La Paz. It's a bit tricky because it can get really shallow. Our keel is six feet deep and the depth sounder said it was eleven feet there. It is also very narrow so if you go outside of the markers you can run aground. We made it safely and docked.

We got off the boat and went to a nearby Walmart. We got some cold pizza for dinner, a pepperoni stick for the walk back, a drink, and three luggage bags for the flight.

We finally got back and made the pizzas. They were really good. That night we also watched Monty Python, and it was really good. The next morning we woke up and started getting the boat ready. I started getting my bunk ready and packing my clothes and all the things that I was bringing back. At first it was okay but the temperature started rising and it got a bit hot.

Later on that day Liam and I went up to the pool with our water guns and had a water fight. The water in the pool was really cold but refreshing. Then we went back to the boat to have the pizza. It was super hot inside the boat, and the oven was not working so we had cold pizza. I thought it was okay.

The next day we went to a place to rent cars. The one we got was pretty nice. After we headed over to a place that has storage lockers. We got one and started putting all the stuff we had packed so far inside. Then we went back to the boat and kept working. It was getting hotter and hotter every day so it started getting harder to do stuff. That day we were mostly cleaning inside. We also had to move the boat to a different slip. It was kind of hard because we had to get really close to the rocks. But we made it. Liam and I went swimming too and played with my Lego boats. It was pretty fun. Although eventually we had to go back and work some more.

That night we went to a restaurant called La Fonda. We had been there before and it is pretty good. I had Sopes and Liam had tostadas, but I can't remember what my dad had. They were really good and big!

After we were done we went down to the plaza and had ice cream with Watcha Gonna Do. I could not finish mine because I was to full. Then we all started playing soccer with the locals. It was really fun but that same night Liam also lost one of his little soccer balls. Then we gave Watcha Gonna Do a ride back to their boat and said bye for good. Then we went back to our boat.

The next morning, and the last we started doing the deck. My dad took the jib down while Liam and I washed the deck. It had reached forty degrees but we had to keep working. At one point Liam and went up to a little restaurant at the marina and watched the TV for a couple hours. We had to do a few more trips to the storage lockers and dump some stuff of.

We finally finished and went out to a restaurant and ate out for the last time in mexico. I had two beef tacos. Liam could not even finish half of one. Then we went back to the boat a went to sleep.

We woke up really early and said bye to the boat and also got the blankets in the car and took them to the storage lockers. Then we went to the bus depot and got the tickets, and then my dad returned the car. We got on the bus and I sat at the front. The seats were really nice and it was air conditioned. They also played a movie. The trip was three hours and we finally got off in Cabo San Josa. We went inside and deposited our bags and then we had to go through immigration. After we went to security and then we waited about ten minutes until we got on the flight. So the flight is from Cabo to North Carolina. Then we will be catching a plane from there to Toronto. So I am writing this on the plane right now.

I don't think I'll ever forget the last few days of getting the boat. It was probably the most work I had ever done. 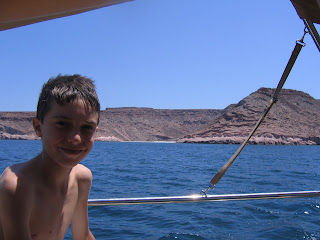