Wednesday started just like any other day. Sleeping in. Even though this really isn’t part of our daily boating routine, we all usually try to dodge getting up early and doing our homeschooling, cleaning, or daily errands. Eventually we left the comforts of our warm bunks and began to eat breakfast. My dad at his chart table, and Liam and I at the dining table, usually reading some book at the same time.  After our crunchy apple cheerio’s, we began our exhausting school work. 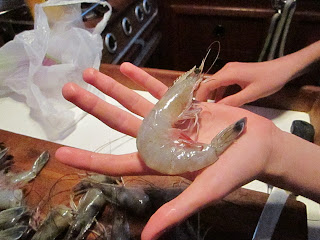 Night fell quickly and the waves grew. We began to have second thoughts about going south and wondered if we should just go across the sea to La Paz. Eventually we decided that we would do two nights, and then stop at Mazatlan, and then keep going. My brother and I then went to sleep.
*** 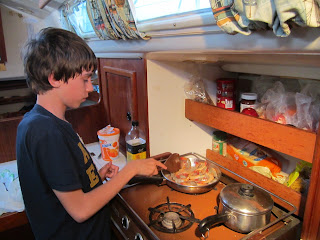 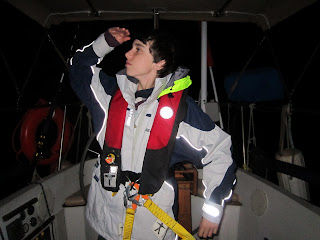 I awoke the next morning at seven o’clock to find my dad trying to get me out of bed so he could sleep. He had just been out for twelve hours and he was exhausted. Liam and I had our breakfast and then went on watch for most of the day while my dad slept. One of the only times he did get up, was when we surprisingly got engulfed with fog, which at that point we were relying on our radar. The fog stayed for at least forty minutes before we escaped back to the sun. Later that night I cooked the shrimp that we had bought. They were delicious, but a real pain to get all the shells off. My brother was only able to eat four, because apparently, the intestines and guts were going to make him sick. That night my brother and I stayed out till 9:40 listening to music through the speakers. It became dark very fast, but it was fun to find constellations’ and shooting stars in the night sky. When it was time, my dad came back out for a long night, while I happily jumped into my pre-heated bed.
***
I woke the same way the next morning and quickly ate breakfast and then headed for the cockpit. As the day got to about the afternoon, it began to get hotter than it had been before, so I removed my socks and jacket, and got into a t-shirt and shorts. At about three, Mazatlan was spotted. It was still another hour before we got to the anchorage, but the whole time we got a great view of the city and the rugged cliffs. Eventually we got to the anchorage where I took the wheel and my dad put down the anchor. We then sat in the cockpit where my dad drank a cold beer and Liam and I ate some chips. It was officially the longest passage we had ever done, and we were out of the Sea of Cortez.
Later on, after Liam and I did the dishes, and my dad made some tacos. I then began to do the blog which I am doing now, and I think I am done.
Kai
Kai
Posted by Outrider at 21:19