Back to the Boat!

Today is New Years Day, and we are on our boat which is out of the water at the moment. We are in a city in Mexico called Guaymas. The temperature is not too hot and not too cold.
We arrived here last night on a bus that we had been riding for six hours. We caught it in a city called Los Mochis which we stayed in for a night. The day before that, we also caught a six hour bus ride from Mazatlan, to Los Mochis. The buses were pretty nice actually. The seats were comfortable and there were TV’s, although there was only one movie in English, and I had already seen it. The day before the first bus trip, we had to catch three planes. The first from buffalo to Detroit (we also caught a bus from Toronto to Buffalo) then Detroit to Mexico City. That flight was five hours, and Liam and I were really disappointed when we found out that there were no TV’s on the seats. The next flight was from Mexico City to Mazatlan. The plane was really small but it lasted about an hour and a half. The Mazatlan International Airport was surprisingly really small, considering how many tourists go there for vacation.
From there we caught a taxi to our hotel, right across the street from the beach. Than night we decided to go out for dinner. We decided to stop at one, fairly close to our hotel, only because they were playing Manchester United on a large TV. I had beef tacos, my dad had shrimp tacos, and my brother had chicken tacos.
The next day we went out for breakfast and then spent most of the day at the beach swimming in the waves, or digging a giant hole in the ground.
The next day we caught the six hour bus to Los Mochis. There we went out for dinner. I had tacos again, my brother had tostadas, and my dad had enchiladas. The next day we caught the next bus to Guaymas. The city we are in now.
When we arrived to the marina yesterday in a cab, somebody else had a boat there and they told us that there was going to be a New Year’s Party starting at eight thirty. We took a nap until then and then headed to the party, but no one was there, so we went back to our boat and slept to eleven thirty and then went to the party. Everyone was there and there was a bon-fire going. We only stayed a bit to eat some chips and cake. After that we came back and went to sleep.
This morning we woke up and Liam and I played some volley ball. I made lunch and Liam did his homework. Now I’m going back out to play some more volley ball. 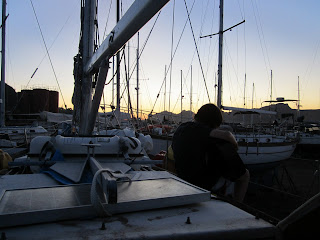