Kai - After The Crossing

Hello
At the moment we are in an anchorage just north of Los Muertos. We arrived a
few hours ago after our long, thirty two hour passage from Mazatlan to
here. We were surprised to find out that it took only one night when we were
expecting two. The winds were blowing in just the right directions, so it
pushed us along at about six knots. My dad did all the knight watches, and
Liam and I did most of the day watches.
This morning my dad told me to look at something on the deck, and
there was a small, pink squid lying there, so I used it as bait, but caught
nothing.
This passage was much easier then our others, because our auto pilot
was working. The rest of the day we were fishing and reading, listning to
music. It was a nice sail, but a bit rocky.
We finally arrived at our destination, nothing caught though. We were
hoping to go to Los Muertos because there is a hotel and we were going to
watch the first match of the world cup. Mexico vs. South Africa, but it was
to choppy, so instead we went to another anchorage just on the other side.
Once there, we cleaned up the boat and then had fajitas for dinner.
Liam did the dishes after, and then we all sat in the cockpit for sunset as
Liam and I fished, but didn't catch anything.
In a few minutes, we will be watching Monty Python on the computer.
One of our favorite TV shows.
Well, Bye 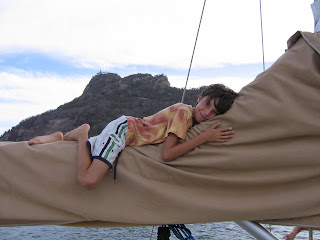