First Day
Yesterday we arrived in Puerto Balandra. There was one other sail boat and three other motor boats but when ever one would leave, another one would come in.

We were getting board so just my brother and I paddled the the dingy in 10-15 knot wind coming strait towards us, finally we arrived about 15 minutes later, and it was only about 20 metres. My brother didn't even get in while I only swam around the dingy once.

The ride back was really good because the wind was pushing us towards the boat.

That knight we didn't do anything special.


Day Two
The next day when we were pulling up the anchor when we decided to stay another day, so my dad took a nap and then we went out to explore the mushroom rock and the beaches for the second time. 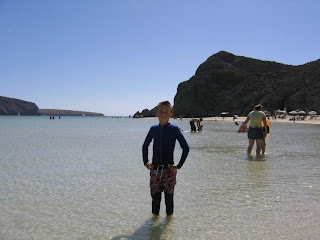 We then slowly went around the bay working our way to the tourist beach. When we got there I went swimming but there wasn't much water to swim in so I just went fishing. I didn't catch anything besides myself.
Then we took a half-an our walk to another beach planing to get something to eat but we just got drinks.
So we then walked back to the other beach. When we got back to the beach we went back to our boat, my brother made Burritos.
Then we watched a show called Doctor Who, the episode was called Vampires of Venice.
Well thats the end of the road fellas.
By Liam
Posted by Outrider at 09:55