Kai - What we've done so far 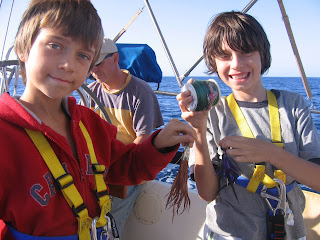 Hi
Sorry I never got the time to do this earlier. We’ve been doing a lot of things lately. We were supposed to be in El Salvodor and Honduras and all those places right now, but a lot of things have been going on, so instead, we are going up to the Sea of Cortez for the last two months.

We got as far south as a town called La Cruz, which is right next to Puerto Vallarta. We were there for about a month because my two grandmas and uncle came to visit us. After they all left, we headed north. We had to do an over- night passage which took thirty two hours. My Dad did the night watches, and Liam and I did the day watches. Someone had to be steering the whole time, because the auto-pilot was not working. But it was still pretty fun.

We finally arrived in a little anchorage called “Old Harbor” in Mazatlan. The anchorage is very dirty and smelly, because it is right next to the sewage factory.

We explored the old part of town while we were there with some other cruisers on a boat called “Wandering Puffin.” And after a while, we went to Marina Mazatlan, were we are now. The only problem about our slip is that we are right next a really nice blue sail boat called Over Heated, which doesn’t make our boat look to good. The guy has waxed and polished the boat a whole ton of times.

While here we met a boat with two kids on it. Although they just left to go to Toronto for a few days. We also met boat called Rocinante and the guy plays guitar so we went over and we are going tonight. We also just bought a boat guitar, so I have been practicing.

Also, we just got two new fishing lures, a rod, and a gaff. We really needed one because, when you get big fish, and you’re going to bring out of the water, the fish usually jumps of (especially Mahi Mahi). A gaff is like a giant hook, so you stab the fish with it, and then hoist it aboard.

Tomorrow we are leaving to a place called “Los Muertos,” which means the dead in Spanish. It is fairly close to La Paz. The trip will take forty eight hours.