The day we were leaving, we got up, cleaned the boat, and then went to the
dock, we went for quick swim, got some stuff at the store, I played some
soccer and then we left.
We were going to try to get into Honey Moon cove but there were too many
boats so we went to Bahia Marquer.
When we got there, we watched Doctor Who, the episode was called Curse of
Fatal Death, it was a funny one, it was the episode that the people that

were trying to be the doctor were in. One of the guys was Mr. Bean.
Then the next day we did home school and then went out fishing, we got a lot
of bites, and then my brother caught a really little bass so we let it go,
then I got something but as we were reeling it in it got away. Then I got
something we thought was a rock, but when we got it next to the dingy we
realised it was a really big barred pargo, so we took it back to the boat,
my brother and dad went back out so Kai could catch something. He got little

fish and let them go, but then he got a trigger fish that got away at the
side of the dingy. So then we ate the pargo for dinner. 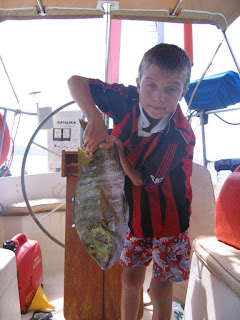 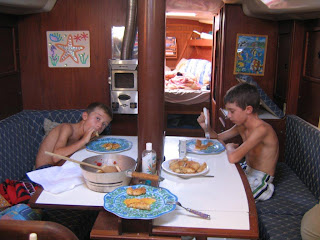