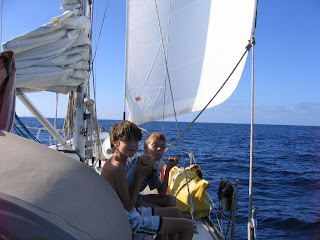 We are now anchored in Bahia La Ventana just north of Los Muertos, we arived
yesterday from Mazatlan, it was a great passage. We didn't catch any fish
until we got right at the entrance, I hooked a fish but then snapped my 80
lbs test and got away with my lure.
It was pretty chopy on the way here but only took 32 hours. We sailed most
of the way with only our Jib up, going inbetween 4 and 7 knots with the wind
blowing out of the west south west.
When we arived We had dinner, did the net, did the dishes, went jigging,
and then watched a show called Monty Pithon's Flying Circus.
This morning we are still in Bahia La Ventana, and we will still be tommoro
so we can go to Los Muertos to watch the world cup first knockout round
Mexico vs South Africa. But we are not sure how we are going to get there,
we are thinking of taking our dingy but that would take almost an our, so we
might try to get a lift from some one on land. I'm probably going to cheer
for South Africa.
We are going to go dingy trolling some time around dusk, so hopefully we
will catch something.